Ghana: the golden coast of Africa

”Obrouni!” – As a European in Ghana, you will hear this word often. Children, taxi drivers and street seller use it to steal your attention. Obrouni means “white man” or “man from the horizon” and that is exactly what Europeans are in Ghana, extremely white men or women from the horizon.

From 1481 onwards, Ghana has been exposed of European influence. Portuguese, British and Scandinavian castles were built along the coast to house European traders in gold, slaves and ivory. Despite the fact that Ghana was a colony of the British crown from 1847 till 1957, it is still the slave trade period which sets the strongest architectonical mark on the country. The most known landmarks are numerous old slave castles along the Ghanaian coast.

As the first country in sub Saharan Africa, Ghana could celebrate its independency in 1957. Throughout the continent, Ghana became a symbol for the independent and free Africa, and played a significant part in the liberation of other European colonies. This fact has left deep traces in the Ghanaian self-understanding and contributed to shape their self-respect and national consciousness. Much of this honour can be attributed to the country’s first president, Kwame Nkrumah. Nkrumah was one of the great, international forerunners in the struggle against colonialism and repression. His ideas on pan Africanism were studied throughout the world and formed an important basis for the African Union of today. 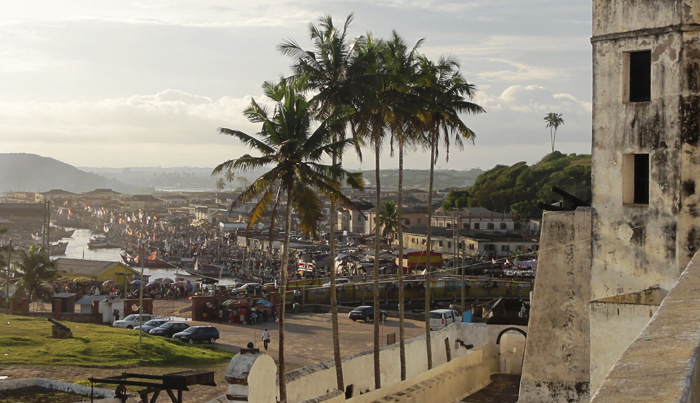 The transition from British colony to independent state proved to be demanding for the new country, and Ghana has seen a series of shifting governments throughout the years. Still, Ghana has, compared to the rest of West Africa, avoided large internal conflicts, and is today one of the most stable states of the region. This is reflected in the capital Accra, which is said to be one of the African capitals with the lowest crime rate. The Ghanaian’s belief in honesty, and a strong social justice could possibly be the cause of this. Persons caught stealing can expect a rough treatment by the street justice.

As is the case in most African countries, the Ghanaian people are composed of several different ethnic groups. The great majority is Akan speaking, the gold rich Ashanti being the historically most prominent group. The passive colonial government of the British Empire left a limited, yet strong, political authority with the traditional chieftains, and although Ghana today is a democratic republic, the chieftains remain politically influential.

Despite the fact that the official language is English, local tongues characterize daily speech in Ghana. With its plurality of linguistic and ethnic groups, the country displays a great variety of traditions, customs, and cultures. The traditional Kente outfits are commonly used, and with their strong colours and golden threads they make a colourful display wherever people meet.

Travelling in Ghana can be an exotic experience for any North European. The landscape displays great variation, ranging from magnificent beaches, via rain forests and three clad hills, to the dry desert landscape of the north, bordering the Sahara. The peoples inhabiting the various parts of the country has adapted to the different ecological conditions, and this adaptation has had an impact on their social relations and habitation patterns. Ecological conditions also represent great challenges for Ghana. Climate changes, desert spreading, and water shortage puts the country to test.

Ghana is a complex country of great variation. As a young nation facing big challenges, the country provides an interesting entry point and has a lot to offer for anyone wanting to learn more about Africa. Ghanaians often point out that “time does not pass - it arrives”. Bearing this in mind we are happy to let them greet us “Akwaaba” (Welcome).